You could buy a license to the upgraded modeling software or just keep downloading files from Thingiverse that other people have created. Or, you could look at another option.

Have you considered a 3D scanner?

If you’re are looking to buy a 3D scanner this review of the V2 3D desktop scanner offered by Matter and Form Inc. will help you with you’re decision.

Matter and Form was founded in 2013 by Drew Shark and Trevor Townsend, experienced entrepreneurs with backgrounds in programming, graphic design, IT consulting, software development and business analytics. They launched their first desktop 3D scanner in 2014 and the V2 scanner in 2018.

In short, the V2, like other 3D scanners, creates a digital three-dimensional model from a real world object. These models are then, cleaned and meshed with proprietary software for export into .stl or .obj file formats that you’re 3D printer uses to create a replica of the original object.

The V2 scanner has a compact design that includes a patented rotating platform, illumination system, imaging system and software package that ‘recognizes’ and compensates for movement of the object or background. With a height and width of 13.5″ and 8.25″, respectively, the scanner can accommodate objects 9.8″ tall by 7″ wide with weight up to 6 pounds.

A nice feature of the V2 is its ability to be closed, protecting the turntable and imaging system, into a 3.5″ x 8.25 ” package.

The V2 scanner uses two 605 nanometer wavelength lasers to illuminate the object and a digital camera to capture the light reflected off the object as it rotates upon the scanner’s turntable.

The digital camera uses the same CMOS sensor technology commonly found in smartphone and digital cameras to help keep the cost of the scanner within typical consumer budgets.

The illumination system directs vertical stripes of light to brighten points on the object being scanned and the digital camera captures the brightened points that are not blocked by other portions of the object as a bright line of pixels. The illumination lasers and digital camera are positioned and oriented so that laser light will not be reflected off background objects within the camera’s field of view enabling the camera to capture only bright points reflected off the object.

The scanner’s control system uses triangulation of the known positions of the illumination lasers, digital camera and rotational axis of the object turntable to convert the bright points captured by the camera into points within a 3D coordinate system or point cloud.

To capture the full height of the object being scanned, the camera system is translated along a vertical axis during rotation of the object. As the object is rotated, the control system records the vertical location of the reflected light points. When the controller verifies that the highest points detected during the current scan are at the top of the camera’s field of view, the camera is translated upward about 1.5″. The camera is moved upward by an amount less than the total field of view so that, at the new position, the current field of view overlaps the previous field of view. In this way, full imaging of the entire object is ensured.

Initial set up and operation is relatively straightforward. You will want to have a sturdy, solid surface to locate you’re scanner to prevent movement of the scanner and object during scanning.

To start you simply connect the scanner to you’re computer via the USB cable, plug the scanner into a standard outlet – a power strip with a surge protector is recommended – open up the scanner and power it on with the MF logo switch on the front of the scanner.

The scanner will need to be calibrated before the first scan. Select Calibrate in the main file menu, place the checkerboard on the center of the turntable and follow the prompts in the two-step calibration process.

Scans are started by selecting +new scan from the main menu. The Regular Scan option uses both lasers and takes about 15 minutes per pass. The +Quickscan option, available as an upgrade, uses one laser and drastically cuts scan time down to 2 minutes per pass.

Scan parameters based on the objects geometry, texture and coloring are easily set by slider bar controls in the respective parameter menu based on direct feedback from the camera. You simply move the slider control for the Geometry Settings and Texture Settings menus until the camera shows the desire laser exposure.

The scan path can also be adjusted to image only a portion of the object.

Once the laser exposure settings are set properly, select Scan. The Scan Progress window will display the scanner’s progress and enables the user to monitor point cloud data collection in real time via the Spin, Zoom and Pan options.

When the scan is complete, the Project Editor lets the user clean scan data through Brush, Noise Selection and Crop tools to remove erroneous points that may have been captured such as from the background or turntable.

Once the point cloud is cleaned up, the model is Meshed to define the number of digital polygons that define the object’s surface. A low mesh count results in a smaller number of large, smooth polygons. A high mesh count results in a large number of small, dense polygons that create a rougher surface. As with the other data manipulation tools described above, the mesh slide control lets users play with the parameter settings to achieve the desired surface roughness.

After meshing, the model definition or project file is saved and then can be exported in a number of different file formats depending on what the 3D model will be used for. STL and OBJ file formats are available for 3D printers.

Here’s a tutorial on scanner set up and operation put together by Matter and Form.

Get up to 0.1 mm accuracy with the precision of these eye-safe red lasers. Supported on both Windows and Mac, with multiple export capability for 3D printing.

The utility patent, US 9,900,585, was issued February 20, 2018 and covers the object rotating system, the digital imaging camera and associated vertical movement system, the laser illumination system and the algorithm that detects object and/or background motion during scanning. A corresponding international patent application is pending.

The utility patent gives Matter and Form the right to prevent others from copying their scanner’s illumination, imaging and motion detection systems.

The design patent, US D720,352, issued December 30, 2014, covers the ornamental design of the scanner and gives the company the right to prevent others from copying the external aspects or “look” of the scanner.

I like the strategy of having both utility and design patents. Competing companies will likely be able to come up with variations on illumination, imaging and data processing systems that are clear of each other’s utility patents but they will need to come up with different looks for their scanners providing yet another path to differentiation in the marketplace. 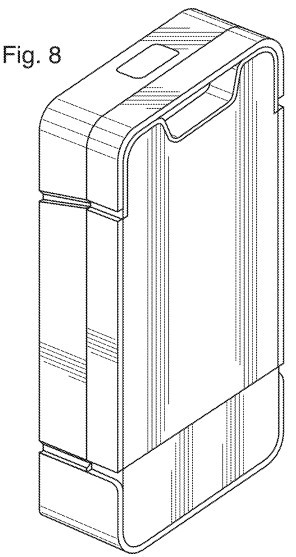 Much like what has happened with 3D printers, the technical gap between expensive, high end, commercial scanners and more affordable consumer scanners is narrowing rapidly.

No doubt there are improvements in the optics and turntable movement mechanisms in the V2, but since the optics used are established, off-the-shelf technologies, the key to technology leaps in the scanning arena is software development.

With over 5 years of development built into the software package, the V2 scanner is sure to outshine its predecessor scanner, the V1.

At $749.00 this scanner likely lands at the higher end of most home 3D printing budgets and while there are cheaper scanners available you are not likely to find better capabilities for this price point. As an extra incentive, educators are eligible for a 15% discount.

I recommend the Matter and Form V2 scanner for those 3D printer enthusiasts that are ready to take their creativity to the next level.

What will you create?

If you have experience with the V2 printer, please provide you’re insights in the comments section below.